The photovoltaic market in Spain has registered a large number of projects not only for the power of the solar plants (MW) but also for the business conditions established in the PPA contracts.

Murcia, Extremadura and Andalusia are the Autonomous Communities that have concentrated a greater number of photovoltaic projects, some of them with important volume of power as the photovoltaic plant of Mula (Murcia) with 500 MW, Talasol Project (Cáceres) with 300 MW or the Nuñez de Balboa plant (Badajoz) with 500 MW.

A common denominator of most transactions is that sponsors have avoided merchant risk by negotiating PPA. One of the most important operations, due to being two Spanish listed companies, is the Solaria operation, signing two PPA agreements with Repsol for a power of 50 MW each. Another transaction recently announced was signed by Cox Energy and Audax between Spain and Portugal. This operation represents the largest photovoltaic PPA in the world with 660 MW of total contracted power.

According to the financing of renewable energy projects without subsidies, we generally find a generalized preference on the part of banks to have a PPA contract with a solid offtaker that makes the project bankable. One of the recent operations in Spain that have been closed in this way was signed by Baywa in Don Rodrigo, which has been financed by Deutsche Bank.

Financial structuring of a project around a PPA usually has the advantage of offering better financial conditions, such as a higher percentage of financing or some basic points less margin. However, it has other drawbacks that must be taken into account, such as the longer time it will take to sign the PPA contract for the bank's satisfaction.

The merchant business model on the other hand offers greater simplicity in contractual terms at the cost of making the financing somewhat worse. One of the problems of the merchant model is that it tends to suffer from low liquidity, due to the limitations of traditional banking. It remains to be seen if this gap will be filled by other market players, such as private funds that invest in debt or infrastructure funds.

When structuring a bankable and profitable energy project without subsidies, it is convenient to keep in mind the optimization of the commercial revenue model. The project will not only sell a product (MWh) in a market (Spot market). Additionally, it generates and sells another product, such as Guarantees of Origin (GOs) for export in European markets. Within the Guarantees of Origin section, there is even talk of GO classes, such as the GO2 that can allow an additional revenue generation with which CAPEX complementary financing can potentially be raised up to 15%. 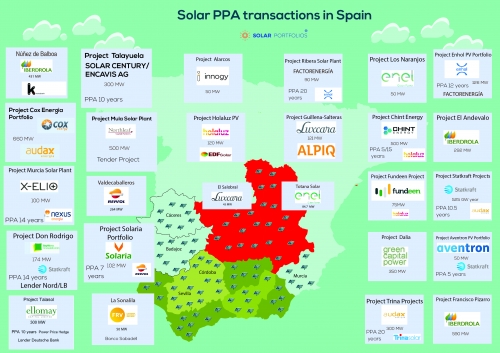